The arrival of summer and beach vacations are also synonymous with jellyfish stings. Jellyfish are present all along the Spanish coastline and their sting, in addition to being painful, can also put a damper on our beach projects.

During the summer of 2021, milder average temperatures are expected, causing this animal to appear in greater numbers in Mediterranean or Atlantic waters.

During the summer period, thousands of jellyfish are pushed onto our beaches by the currents. InfoMedusa therefore arrives to offer up-to-date information on the status of these marine animals on our usual beach.

Updated jellyfish activity
InfoMedusa has been developed for iOS and Android so that the greatest number of users can access the activity of these invertebrates in real time. The application was born with the aim of developing a network of local observers along the coast of Malaga, due to the constant increase of this type of marine animals in the Andalusian province.

Its origin dates back to June 2013, when both tourism entrepreneurs and bathers noticed a growing concern generated by the increase in the number of these animals every year. It was during this year that an information and prevention program began to be developed, including the creation of this application: InfoMedusa.

Thanks to this application, citizens can be informed of the presence of jellyfish in their tourist area as well as the number of specimens, the type of species and their dangerousness. This type of information can help us avoid painful stings from these invertebrates or, if they do occur, be informed so we know what to do.

In addition, to encourage the network of observers on the coast of Malaga, the application has allowed the establishment of a public chat visible to all users, so that any bather can give their comments on the beach condition. The app also allows uploading photos to InfoMedusa to increase the amount of information.

Symptoms of jellyfish stings
The toxic capacity of these invertebrates depends on several causes, but the main one is the species to which it belongs. Thus, the general symptoms of a jellyfish sting are itching in the affected area and the appearance of red or purple marks in the same place. There may also be tentacle marks and burning or stinging pain in the affected area, as well as mild swelling.

Depending on the species that causes the bite, it can be classified according to 4 levels of toxicity:

Estepona maintains its smoke-free beach for the third consecutive year 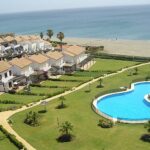 Manilva with four different beaches in one destination