Estepona incorporates a sculpture by Rafa Macarrón, one of Spain’s most recognized artists

The City Council of Estepona (Malaga) has incorporated the sculptural work “Perro I”, by Rafa Macarrón, one of the country’s most prominent contemporary artists, into the city’s heritage. The work, in bronze, weighs more than a ton, is two meters high and stands on the city’s recently redeveloped seafront promenade.

The mayor of Estepona, José María García Urbano, indicated that the incorporation of this modern work into the artistic heritage of the municipality “has an important cultural impact for the city because it will allow us to enjoy, forever, the creation of ‘a painter and sculptor who inspires the public and national and international critics with his work’.

This work is part of a collection by Rafa Macarrón, inspired by the artist’s affection for domestic animals and the memory of nature walks with his dog. The work was offered by the Kronos group to the town hall of Estepona.

“Estepona is an animal-sensitive city, so this dog allegory will be one of the most admired and photographed sculptures,” said García Urbano. Regarding its location, he pointed out that the promenade is one of the “iconic tourist enclaves of the city, where the sea meets the embellished and remodeled city center”.

He mentioned the effort made by the town hall of Estepona so that the city is also a meeting point between art, thought and reflection. “Our streets combine the charm and essence of a city that has brought out all its splendor with artistic initiatives that have contributed to the dynamism and uniqueness of Estepona,” he said.

In this way, Estepona, pointed out, is now an open-air museum with more than 60 large murals on the facades of the buildings, making this action a center of tourist attraction by the number and singularity of the works. Added to this is the renovation of the streets of the city center, with an open-air library through the Poetry Route, and promoted the Sculpture Route with pieces by renowned artists.

A few days ago, “Perro I” was part of the “Quince” exhibition, which he created for the Centro de Arte Contemporáneo (CAC) in Málaga. In this exhibition, Rafa Macarrón combines paintings and sculptures in which he creates imaginary characters with certain naive connotations, influenced by artists such as Picasso and Dubuffet.

Macarrón, born in Madrid in 1981, is a self-taught artist, cyclist and trained physiotherapist. Influenced by comics, Spanish painting of the 50s and 60s, the work of Fraile, Matta or Quirós, Macarrón has become a reference in terms of painting.

He has participated in numerous individual and collective exhibitions at national and international level, such as “Fluorescent Routine” at the “Allouche Gallery” in New York (2019), “Tropical Universe” at the Juan Silió gallery in Santander (2018), or “When a man enters a room, he takes his whole life with him” at the Marta Cervera gallery (2017).

Winner of the BMW Painting First Prize 2010, or even ‘Arco Best Artist’ in 2013, he regularly participates in many national fairs such as Arco, Summa or Justmad. 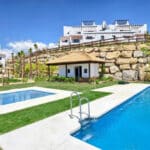