Estepona is a safe city and the crime rates recorded by the Ministry of the Interior prove it. The city commissioner, Fernando Calleja, assures that any district of Malaga city has a higher crime rate than Estepona despite having a registered population of over 70,000.

There is a low level of crime in the city. According to Calleja, this is because the city does not have marginal or depressed neighborhoods “where young people are always on the streets inventing things”. Also, according to the head of security, there are very few indigenous drug-using offenders “and as soon as they come out of prison, they are checked”, he says.

The most prevalent crime in the municipality is itinerant crime, specializing in thefts from vehicles, thefts from shopping centers and thefts from gas stations. “They tend to watch tourists as soon as they arrive at the airport and take advantage of their carelessness to rob them,” explains the commissioner. Burglaries are also reported in homes. “There are a lot of luxury houses in the housing estates here and the criminal is looking for the money,” he said. The most serious cases, such as the murder of a man in front of his house in El Campanario, or the kidnapping and subsequent murder of a young man in the center of town, are, according to Calleja, cases of settlements linked to drug trafficking.

The commissioner, who will retire in July after six years in Estepona, regrets not being able to attend the opening of a police station. The current building was intended to accommodate 70 officers and currently has 240. There are offices shared between several units. Ms Calleja recalls that several offers have been made and projects presented by the town hall, “but the crisis and other priorities have not made this possible”, she regrets.

With regard to the workforce, the staff is at 91%, the rest is on secondment, conciliation, leave or absence. The staff will now be increased by ten agents and two sub-inspectors to compensate for this lack. They also have 20 Police Academy students.

In addition, the evolution of the number of crimes and offenses decreased by 1.26% (up to the fourth quarter of 2019) compared to the same period last year, with a total of 3,698 criminal offenses, according to Home Office Crime Scale data. 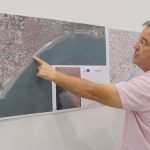 Estepona proposes the redevelopment of the promenade for 2.6 million