The 48,201 real estate transactions recorded in June confirm the best figure for this year, according to INE statistics, and push sales and purchases to their best semester since 2008, with more than 267,700 transactions between January and June. The housing market is stimulated by the recovery of the economy and the savings of families.

The housing market in Spain is picking up the pace lost with the economic crisis caused by the coronavirus pandemic at cruising speed after the publication of data on sales and purchases of housing by the National Institute of Statistics (INE), of the Property Registries Association.

Last June, 48,201 real estate transactions were recorded, an increase of 73.5% year-on-year, just in the month when the first state of alert decreed by the government to fight the coronavirus pandemic was lifted. . This is the best month so far in 2021, and it nearly equals May 2019 (48,351) and July 2019 (48,337), confirming that sales are returning to the pre-pandemic period. 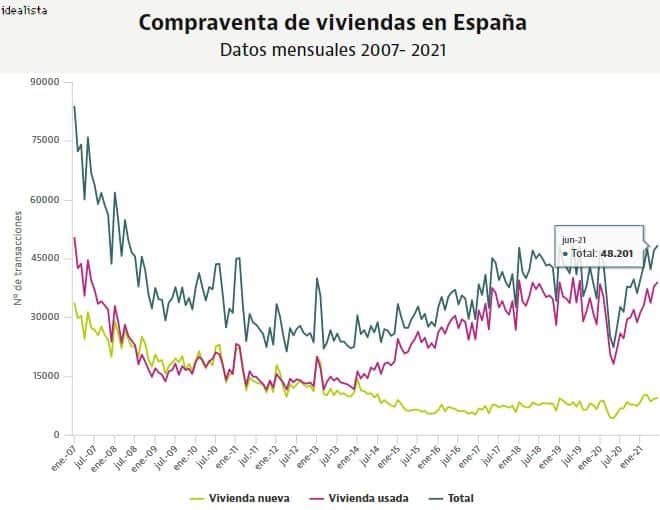 Home sales and purchases have now reached four consecutive months of increases, following increases of 32.4% and 65.9% in March and April, respectively, with the number of transactions more than doubling in May.

For Francisco Iñareta, spokesperson for idealista, “one more month of data formalizes the recovery of the purchases and sales market and its return to pre-pandemic reality. In fact, the more than 48,000 homes sold in the month of June represent a monthly peak that has only been exceeded four times since 2008. Undoubtedly, this volume of transactions is directly linked to the optimism generated by the success of the vaccination processes, the imminence of European aid, the weak interest rates and the increase in household savings over the past year. Even so, it is possible that the volume of transactions will be affected by the inclusion of sales and purchases paralyzed by uncertainty which have been reactivated in a climate of greater optimism, so we will have to wait for future data to confirm whether the market is based on these record numbers.

Record sales of new homes over the past seven years
The record for the best half of the last 13 years is accompanied by other exceptional data on the sale of new homes. Not since the first half of 2014 (67,429) has such a high figure been observed in new construction transactions. Between January and June of this year, they reached 55,777 operations, which is 13.5% more than in the same period of 2019, before the pandemic.

The data for February and March, exceeding 10,000 new home transactions within two months, increased the volume of transactions due, among other reasons, to the inclusion of sales and purchases paralyzed during the worst months of the coronavirus crisis. .

The attractions will remain at the Estepona Exhibition Center until Sunday July 18.