The coastal promenade will soon span the Guadalobón stream

The Deputy Mayor of the Development, Infrastructure and Tourism (FIT) sector, Ana Velasco, explained that this new infrastructure will allow a 1.1 kilometer journey from the H10 hotel to the vicinity of the new bridge built over the Guadalobón stream . 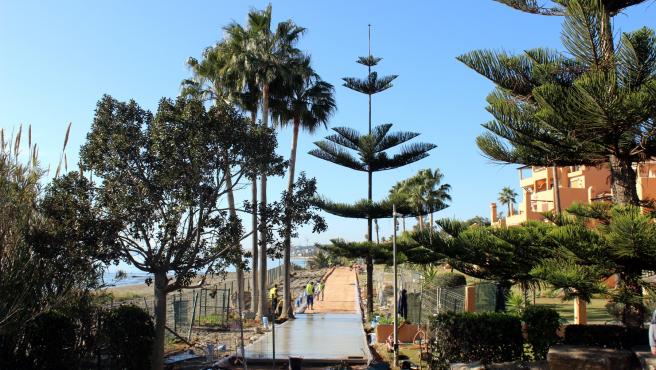 The work will consist of carrying out a section of coastal path with stamped concrete pavement, following the aesthetic used in other sections of the coastal path. In addition, an irrigation pipe and an electrical network will be put in place to light this infrastructure.

This section, which will connect the longest bridge of the path with the promenade of the H10 hotel, will in the future be linked to the one that is projected next to El Cristo beach , they specified in the statement from the City Council.

The works, financed by the Community of Municipalities of the Western Costa del Sol, have been awarded for 82,857 euros to the company CFVC Construcciones SL, which has undertaken to complete the works for the month of March .

The mayor said that the plan to connect the entire coast with a coastal path continues “to move forward at a good pace”. In this regard, he recalled that, recently, the Council inaugurated two new sections in the Velerín region and another in the Los Llanos region . The latter connects the urbanizations of Villas Andaluzas to Dominion Beach.

Likewise, it is promoting others in the western part of the municipality, especially in the area of Arroyo Vaquero, where a new bridge has been projected over the channel of this stream, which is currently in the technical drafting phase .

In the easternmost area, around Laguna Village, another section will be executed in the coming months with which it will be possible to join 10 consecutive kilometers of trail . This work is currently in the public tender phase.

The coastal corridor project aims to unite the more than 22 kilometers of coastline of Estepona through pedestrian paths with the objective that citizens can walk and practice outdoor sports. This project, which extends over the entire municipality, has already been carried out over more than 18 kilometres.