Salado details that the various companies offer 2.1 million air seats to the Costa del Sol, or 90% of the seats offered in 2019, before the health crisis.

The Costa del Sol approaches the last quarter of the year with the almost total recovery of its connectivity, and 90% of the air seats offered by the various companies at Malaga-Costa del Sol airport in 2019, before the health crisis.

This was stated by the President of the Provincial and Tourism Council of the Costa del Sol, Francisco Salado, on the second day of the WTM, who stressed that “our forecasts for the coming months are optimistic because the data we have indicate that the Costa del Sol will recover in the last quarter almost all its connectivity with a total of 2.1 million seats offered on the Costa del Sol between 1 October and 31 December, i.e. almost 90% of the seats offered in 2019″. (2,332,319)”.

Of these, 481,834 will come from the UK, more than 400,000 from Spain and some 150,000 from Germany. “We have in the fourth quarter of 2021 2.1 million seats offered, 31 countries connected, 117 cities and 30 airlines operating with Mála-ga”, underlined the president of Turismo Costa del Sol who clarified that “we have the same number of countries connected than in 2019 and only four cities less connected than then”.

“Improving connectivity is one of the fundamental pillars of Costa del Sol Tourism’s strategy and it is with this main objective that we have come to what is one of the main tourism fairs in the world”, said the chairman of the entity who detailed the specific forecast of air seats offered from the United Kingdom to the Costa del Sol for the next six months.

In this sense, the forecast of passenger arrivals from the United Kingdom to the Costa del Sol over the next six months is around 900,000 passengers.

This means that between October 2021 and April 2022 there are a total of 897,786 seats offered to destinations from a total of 18 UK cities. London, with 383,872 seats offered, is followed by Manchester and Birmingham as the main cities by volume.

The 897,786 seats on offer are operated by a total of seven airlines. Ryan air, with 331,137 seats, is the company that offers the most seats. It is followed by Easyjet with 228,718, Jet2.com with 127,896 and British Airways with 121,168. It should be noted that the flights scheduled for the weekend represent more than half of the plane seats offered at Malaga airport.

“Connectivity with the UK in the coming months is enjoying extraordinary health,” said the president of the Provincial Council and Costa del Sol Tourism. In fact, the London capital offers direct flights to Malaga every day during the period analysed, Manchester and Bristol almost every day, with daily flights for 90% of the days, and Birmingham, Glasgow, Leeds and Liverpool which offer flights direct to the Costa del Sol for 75% of the days.

According to the president of the entity within the framework of the fair, “Our Big Data tool also allows us to know the origin of the British who carry out searches towards our destination, highlighting London, from where four out of ten searches are carried out, Manchester which is the city from which 10% of the searches are carried out for flights between October 20, 2021 and April 19, 2021 and Leeds, Glasgow, Birmingham and Liverpool, which each represent between 5 and 6 % of searches completed”.

But also, as explained by the president of Costa del Sol Tourism, “Our Big Data tool also allows us to know what the trends and preferences of the British market will be in the coming months to be able to act on them with much more precision. “.

The study therefore indicates that they are looking for open spaces, where there are not high concentrations of tourists, products and sustainable destinations.

Among the favored segments are golf, sun and beach, leisure travel (travel that mixes business and pleasure) and an increased interest in telecommuting.

The new profile of these tourists “thus leads us to insist on a commitment to higher quality projects to offer them the image of a renewed destination”, underlined Mr. Salado.

Salado announced the actions that the entity will develop in the coming months, including direct actions with the consumer, a fam trip with travel agencies and a press trip with the British media.

The entity seeks to attract medium-sized congresses, to increase loyalty actions with British travel agencies, which have been the most affected by the pandemic, and to design promotional activities with original intermediaries whose price of stays in our destination.

Many WTM meetings have focused on the issue of connectivity. One of them is the meeting held with Interface “which will allow us to sign an agreement to have data in our Big Data Tourist, real-time data from seven of our main markets, especially at European level”, said said the president of Costa del Sol Tourism.

Turismo Costa del Sol also met with Jet2 Holidays to establish a co-marketing agreement to encourage the arrival of visitors from the United Kingdom and “thus recover the figures to which our most important international market has accustomed us”, said Mr Salado.

During the fair, Costa del Sol Tourism will also meet with the Spanish tourist office in London to take the pulse of this important market. Among the twenty meetings planned are also meetings with operators, OTAS, the media and companies specializing in tourism marketing.

The President of the Provincial Council and Costa del Sol Tourism, Francisco Salado, concluded by insisting on the need to be cautious “but optimistic because the work carried out hand in hand with the tourist entrepreneurs of the Costa del Sol is already bearing fruit. and should consolidate the recovery of a market that has hit an all-time low due to the pandemic as we know British tourists are keen to travel and return to the Costa del Sol.” 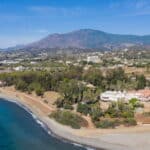