The history of Estepona until the 18th century

Posted in History, Uncategorized On 14 March 2022

First during the Phoenician phase, before the Romans and Arabs, Estepona was a stopover for ships traveling between Cadiz and Malaga, known as Gadir and Malaca. At that time, Estepona was known as Astapa, as it means river and covers people who live near the sea.

The most important settlement of this time is that of the Guadalmansa River, where hot springs remain that could belong to the Roman city of Salduba .

At the beginning of the 8th century, when conquered by the Muslims, the fortress called Castillo del Nicio was built, located in the upper part of the Padrón, and which reached great importance during the Arab domination. Later, and in the time of Caliph Abderramán Segundo, another fortress called Estebunna was built . At that time, the Arabs called the city Astabbuna. Many navigators arrived there and found the ideal place to settle.

In the year 1342, a transcendent naval battle takes place off Estepona. Alfonso XI, to contain the invasion of the Benimerines, placed a powerful fleet in the Strait of Gibraltar, destroyed by the Muslims. The kingdoms of Aragon and Genoa, considering the danger posed to them by the invasion, made common cause with Castile, so that an Aragonese fleet of twenty galleys encountered thirteen African ships in the waters of Estepona. The Christian ships rushed in with a great thrust and destroyed most of the enemy ships

In the 15th century, under Muslim domination, the villagers refused to pay taxes to King Henry IV, who finally authorized a Christian incursion.

1456, THE CHRISTIAN RECONQUEST OF THE CITY

The various chronicles of Henry IV, which describe it, relate in a similar way, the occupation of Estepona by this king of Castile, in May 1456. Seeing the high fire that the Christian armies produced in their wake, along the coast: ” The Moors of Estepona abandoned the city, … and the next day the king took up residence near the city of Estepona . “ And the fire was so big[Fuengirola] and appeared so high that, seen by the Moors of Estepona, they abandoned the city, that there was no one left in the world or anything they could take with them that they all climbed the range of mountains”

There was therefore no combat or reconquest as such, at most one could speak of occupation .

The reconquest gave rise between 1499 and 1501 to attempts at rebellion. The Alpujarras Rebellion (1499-1501) was a series of uprisings by the Muslim population of the Kingdom of Granada, in the crown of Castile (former Emirate of Granada) against their Catholic rulers. They began in 1499 in the city of Granada in response to the forced conversion of the Muslim population to the Catholic faith, which was seen as a violation of the capitulations of Granada in 1491. The town’s uprising was quickly extinguished, and was followed by more serious riots in the nearby mountainous region of La Alpujarra. Catholic forces, sometimes personally led by King Ferdinand the Catholic, succeeded in suppressing the revolts and severely punished the Muslim population.

Catholic leaders used these revolts as justification to abolish the Granada surrenders and the rights of Muslims guaranteed by the treaty. All Muslims in Granada were then forced to convert to Catholicism or be expelled, and in 1502 these forced conversions were enforced throughout Castile.

Shortly after the repopulation of Estepona in the early 16th century, its citizens claimed municipal independence from the town of Marbella controlled by Juana la Loca.

It was in 1729 that the first king of the Bourbon house in Spain, Felipe V, accepted the independence of Estepona from Marbella, when it was signed in Seville on April 21, 1729. To declare it, judge Antonio de Provence is commissioned, accompanied by a scribe, Gabriel Valero, and a sheriff, Diego Cotilla.

Arrived in Estepona on June 20, 1729, a notification is sent to the mayor, Diego Sánchez López, and to the aldermen, Pedro Sánchez de la Escuela, Rodrigo Navarro and Juan Parrado to summon “all the citizens of Estepona” signaling that they meet in the Plaza Mayor” to read them the letter of royal privilege and Her Majesty’s certificate. “

On the day of the roll call, June 21, 1729, a large number of people went to the public square where the banks were and a table in the middle, by which Estepona was freed from the city of Marbella, making it a City “alone and with itself”, with civil and criminal jurisdiction, high and low, and enjoying the jurisdiction “from the stone of the river to the leaf of the mountain”.

It was at this time that Estepona stabilized and began to prosper as a fishing village. 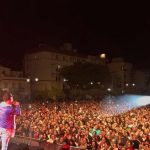 Flamenco is celebrated at the Plaza de Toros in Estepona this Saturday, August 8