Tourism behaved very unevenly last year, so much so that, while most of them have only just begun the road to recovery, tourist establishments in six destinations recorded more revenue per room than before the pandemic. Two of them are located on the Costa del Sol: Estepona and Marbella, according to the Alliance for Excellence in Tourism (Exceltur) in its annual barometer of the profitability and employment of urban tourist and holiday destinations Spanish. A situation which contrasts with an average drop of 50% in overall income, an average of 31.9% of the closed hotel stock, an income per room in open hotels of 45.6 euros, i.e. 25.5% below the levels pre-pandemic, according to the same report. Against this global x-ray, Benicasim establishments recorded 30.7% more revenue per available room in 2021 compared to 2019, known as RevPAR; Estepona saw an increase of 25.7% ; Puerto de Santa María posted an increase of 19.4%; Chiclana closed with 15% more; Marbella had an increase of 8.4%; and Roquetas, 1.5%. Exceltur also clarifies that on the North Coast, increases of 18.3% were recorded on the Costa Verde and levels equal to 2019 were reached on the Costa A Mariña Lucense.

The other side of the coin of these holiday destinations is the island of Mallorca, Ibiza, the Catalan coast, the Canary Islands and Benidorm, which are the ones suffering the most from their dependence on foreign demand, with notable drops in income of their open hotels and a large average volume of closed hotels.

In this disparity, the city of Malaga also ranks fourth in the country in terms of income per available room, with 54.9 euros. This ranking is led by Palma de Mallorca with 69 euros, followed by San Sebastian with 66.7 euros and Cadiz with 64.2 euros. However, the report states that these figures are far from the leadership it held in 2019.

Exceltur points out that it is the holiday destinations that have experienced a better evolution compared to the cities and highlights that within these coastal tourist municipalities, six municipalities conclude the year 2021 with improvements in revenue per available rooms opened by compared to pre-pandemic levels.

Exceltur details that “cities end 2021 with a worse balance sheet than holiday areas, recording a greater drop in revenue per open room compared to 2019, with an average drop of 41.1% to reach 43 euros, and with an average of 23.3% of the factory closed, in a context of falling occupancy rates, specifically 31.7% less, and prices down 13.8%, strongly impacted by the lack of tourism international, particularly long-distance, the difficulties in boosting the fairs and congresses segment and the structural effects of the substitution of business travel by online digital options”.

This tourist alliance recalls that this study collects data from the end of 2021 of the 91 main Spanish tourist destinations, 46 urban and 45 vacation. “This barometer allows you to approach and compare the levels of socio-economic profitability generated by the entire tourism sector in the main urban and tourist destinations throughout Spain, based on official data and explained in different rankings that order them according to the results obtained from the indicators available for regulated accommodation, combining price and occupancy levels (REVPAR) from the National Institute of Statistics (INE). extracted from Social Security”, they specify.

Avenida de España in Estepona will completely change its aesthetics after being remodeled. 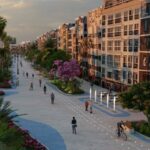 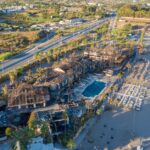